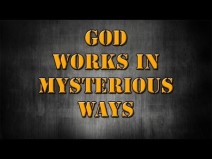 “The Lord works in mysterious ways”.

I woke up again with the words “help me” as my first prayer of the day. Another morning where my weary body was racked with pain and the day ahead seemed to hold a bit more than I was ready for. How was I going to pull myself out of bed to accomplish the responsibilities of the day? Thankfully, I know who to turn to for the strength I need when I have none of my own. I went to a source I had counted on time after time. In my weakness I cried out to the Lord again for help to get out of bed and start another day.

My help comes from the LORD, who made heaven and earth! Psalm 121:2

Next thing I knew, I was hit by a strong urge to go to the bathroom and so it didn’t take

long to find the strength to get up. Once there I found it a bit easier to get to the kitchen for the food and medicine I needed; then I was able to continue onto each next step toward the rest of the day. Did God really answer my prayer by using my bladder? I wouldn’t have thought so previously but for some reason it seemed like just what I needed to get me going and that was what I had been asking for.

It is not the first time I realized that God uses unusual ways to help His people.

In my women’s Bible study one of the wonderful ladies that attends was telling us about her experience teaching in a kid’s program called Awana. She has been going through all the Bible stories to give these children an overview of God’s Word. It was when she came to the story of Samson in Judges Chapter 13 that she was finding difficulty. How do you tell children about one of God’s deliverers who was not only a womanizer but a disobedient, pride-filled man? While she loved telling the story of David, the gentle, giant killer King, because he was a man we should want to emulate, Samson was a problem. However, his story clearly encourages us that our God can use anyone, even the most unrefined.

There are many other examples in the Bible that teach us that God does not always choose the most likely candidate to rescue us.

Personally, I want my rescuer to be Superman; brave, handsome, morally secure and someone I can respect. It appears, however, as I read through the Bible, that heroes don’t have to look like that to be God’s choice. For instance, in the book of Daniel, God gave victory to an ungodly leader named Nebuchadnezzar to cause His people to become desperate enough to turn their hearts back to Him; not only did it work, even Nebuchadnezzar found God. 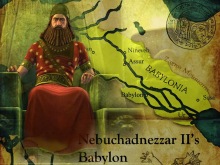 During the third year of King Jehoiakim’s reign in Judah, King Nebuchadnezzar of Babylon came to Jerusalem and besieged it.The Lord gave him victory over King Jehoiakim of Judah and permitted him to take some of the sacred objects from the Temple of God… Daniel 1:1-2

“Now I, Nebuchadnezzar, praise and glorify and honor the King of heaven. All his acts are just and true, and he is able to humble the proud.” Daniel 4:37

The unusual choices God made also do not appear to simply be a back up plan in case the real hero failed. They seem to have been planned way in advance.

In the first year of King Cyrus of Persia, the LORD fulfilled the prophecy he had given through Jeremiah. He stirred the heart of Cyrus to put this proclamation in writing and to send it throughout his kingdom. This is what King Cyrus of Persia says: “The LORD, the God of heaven, has given me all the kingdoms of the earth. He has appointed me to build him a Temple at Jerusalem, which is in Judah… 2 Chronicles 36:22-23 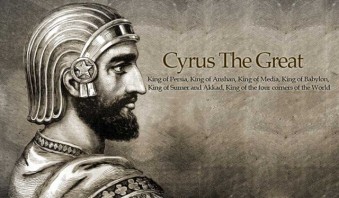 In several books of the Old Testament I read about a non-Israelite leader named Cyrus. The prophet Isaiah actually foretold of his reign 150 years before Cyrus was born. God also spoke through the prophet Jeremiah how this unlikely man would be exactly who His people would need to carry out His plans.(Jeremiah 25) Yes, God actually planned to give the kingdoms of the earth to a tolerant yet foreign unbeliever in order to have His temple in Jerusalem rebuilt. This man that God chose was raised to have the exact mentality needed, and a heart that could be stirred by God, to bring His people back to their land of promise; but he was probably not at all who they would have preferred.

It appears God will use an unusual way because it will work not because it is safe.

I would have loved it if this morning God would had sent an angel to motivate me or even a burst of empowerment from the Holy Spirit instead of the impending possibility of peeing my pants. However, it is clear that God, though He has a myriad of ways to chose from, will use the one that works the best; he knew exactly what would get me out of bed quickly.

God has a good reason to do things in ways that remain a mystery to us. 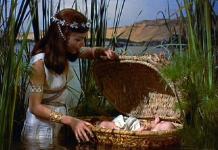 I find it mysterious that God caused His chosen leader, Moses to be raised in the Pharaoh’s court instead of with His own people. Did he also need some different mentality or knowledge in order to accomplish God’s deliverance of His people? From God’s point of view he did. Often our earthly perspective cannot see enough of the big picture to know what a situation calls for and this calls for trust.

I believe that God continues to work in this higher and unconventional way today.

I, like many, have already had my fill of the politics of the day. As I watch and pray, however, I get the distinct impression that God is up to something unusual. I feel God has been asking me not to look for the obvious, safe choice, but to prayerfully seek God for who He has chosen to accomplish His kingdom plan. Could we possibly need a Nebuchadnezzar or Cyrus? Perhaps for such a time as this we do. Do we need a leader that was not raised within the current church crowd so they have a mentality or knowledge necessary to bring about God’s deliverance? Maybe we do; all I do know is that from scripture I have learned that it isn’t always what seems like the reasonable, obvious choice that ends up being God’s choice.

I must learn to desire God’s unusual plans and push away my own.

It will be only His plan that will have the success I truly desire. His Kingdom will come but only in His way. I must chose to accept that and follow the plan no matter how annoying and unusual it seems to be playing out. Even if that mysterious way, like this morning,  takes me on a trip to the bathroom first.

He controls the course of world events; he removes kings and sets up other kings. He gives wisdom to the wise and knowledge to the scholars. Daniel 2:21