The weeds are back and I really need to do something about them this year. Too sick to do much about them last year I should not be surprised at their rapid advance. However, the ones that frustrate me the most are the ones I tried to deal with only to see them right back this year in all their nastiness. Why are they all back? Because I either chose to ignore them or didn’t take care of them like I should have. I didn’t take the time needed to pull out the roots; until I do that they will grow back again and again.

This principle is also true when growing a healthy life; we all have weed-like lies embedded into our minds that, when believed, take root and affect every part of us.

As I wrote in Part 1 of my story I revealed that there were many lies that I chose to believe as I was growing up. These lies, planted by the enemy, the father of lies, grew deep roots that I have had to deal with. In fact, I have found that there were some of them that had become so intertwined into my life that I thought they were a natural part of who I was; all the while they were tearing down my very essence.

Over the last 15 years I have been on a purpose-filled journey with God to pull out these lies by the roots and replace them with truth.

I have been amazed at the freedom and the wholeness Jesus’ healing offers to us all. As each lie was renounce and replaced with God’s truth the closer I have come to being all God intends me to be. I have a great desire for more of this healing and so, in turn, I will be able to help others connect with God for the same kind of wholeness.

However, just when I think I have all those lies cleaned out, like a nasty weed in the garden, another one showed its ugly head.

The most prevalent lie I have believed is that I am not enough. Now, at the age of 53, God has revealed to me that this lie has become the one with the deepest roots in my life and if it is not dealt with will stop the destiny He has for me. How did He do that? Well, I believe God chose to use a very interesting tool to show this one to me; he used the tool of illness.

Before I go any further let me go back to how and why this lie was so easily planted in my life. 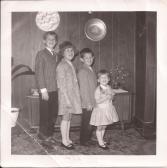 I was the youngest child in my family and being the youngest comes with many unique perspectives. I could definitely relate to a recent list I saw of the Top 21 Things Every Youngest Child will Understand. The two that especially stood out to me were #13: You spent a lot of time hearing your parents praise your older siblings, and #18: Teachers would always compare you to your siblings.

These two simple facts were just what the enemy needed to plant the lie that I was not enough.

The fact is I have 3 incredible older siblings who love Jesus, love others, and all beautifully serve those around them. They deserve all the praise given to them.  I also know that my parents praised me too; it was who they were to be loving and encouraging to all of us kids.  The problem is that once the lie is planted it creates a filter which affects every word that contradicts it. Any praise I was given was quickly destroyed by my belief that anything I did was not enough.

I developed the strategy that the only way I was going to be able to be a part of this family, to be enough for them, was to become someone other than the person I saw in the mirror every day.

I started believing that I would need to be more like the very siblings that I was being compared to. I first looked to my sister who is a great role model. The problem is that we are like apples and oranges, impossible to compare because she has a completely different personality type with different talents and gifts.

I have found that when you try to be someone that you were not created to be disaster is bound to happen.

When you imitate someone else, you become a cheap copy of the original. There is no one else created to be like you. (Kris Vallotton in “Fashioned to Reign”)

No matter how I tried I could not become as popular or get the grades in school that she did. Since she was a cheerleader in high school I decided that I should be one too only to be rejected at the try-outs. I remember when I came home that day thinking that the words “not enough” were tattooed on my forehead. Surely everyone would find out now.

To counter this and with my enemy controlled thinking still intact, I decided to try to be more like my brothers because at least they seemed to have some of the same personality traits and gifts as me. The problem was they were boys and I was a girl; completely different packages with completely different outcomes. At that point I was convinced that God had made a mistake when He made me a girl.

As I found out I could not be like them my next strategy was to completely link my identity to theirs.

I just chose to highlight to everyone that I was their “little sister”; surely that would make me enough. When I chose to go to the same college that they did I thought I could be enough by riding on the coat tails of their success. It actually felt like it worked for a while as the mention of one of their names gave me access to people and places I was sure I could never have been enough to access. Sure, I had my own accomplishments and some of my own success during those years but the motivation behind most of it was to prove to my family that I was enough to be one of them. I could always sense the fear in the back of my mind that someday they were going to discover that I didn’t belong.

Years past and I continued to pursue my “enough status” with everything I could muster.

As each failure came my desperation to prove my worth only increased. My final strategy was to decide that I would be whatever someone needed me to be. I would work hard to detect what someone was looking for and had the flexibility to become pretty close to what that was; with that came the great need for self effort. I ended up teaching at a school where I soon became the jack of all trades; so to speak. They needed a high school math or English teacher; sign me up.  I could prove I could do it even with only my elementary teaching degree. Next, the school all of a sudden needs an athletic director and volleyball coach; again, I have no experience but sign me up. It was another chance for me to prove I was enough.

closer I came to falling into the chasm of stress and self effort I had created.

But this gnawing inner hunger to prove I was enough had to be fed or someone would find out and I couldn’t let that happen. Fast forward to a year ago when I decided to cry out to God because of the complete mess this lifestyle had created on the inside of me; the part of me I didn’t let anyone see but Him. My faithful God answered me, I believe, in the only way He knew it would be fixed.

God allowed the chronic illness my choices had caused to take over my life and in turn take away all of my ability to prove that I was enough.

The first place I noticed the devastating consequences of my illness was at my job as Children’s Ministry Director at the church where I had grown up. As my illness progressed I had absolutely no ability to do even the smallest task. When I had to quit it felt like my world was caving in; my secret was exposed and now all would learn that I was not enough.

Then something began to happen that to me was unexpected. My friends and family still loved and accepted me. This became a direct blow to the roots of my strong held belief and it began to nudge out the lie. 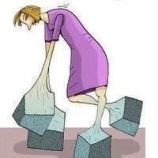 However, that was still not enough. I also noticed that the church I attended and worked was becoming an especially toxic environment. The moment I entered all my symptoms worsened, gravity intensified and I felt like I was being beat with a baseball bat. I now realize that the problem was I still had the powerful presence of that lie making me believe that I still had something to prove. Even though I was sick I inwardly believed that I would be a huge disappointment if I couldn’t do anything to prove otherwise.

One of the characteristics I do share with my siblings is determination and I had to use every bit of it.

Thankfully, God would not give up on me and kept digging at the roots of my need to be enough. He used the very determination I had been using to hide the lie to get me to a place of surrender and finally be able to release this all to Him.

It all came down to a final declaration that enough was enough!

Then it happened one day during a women’s event called “Victorious Living”. This was a day of incredible pain, tears and much wrestling with God; but the root was pulled out. An incredible shift started that day as I allowed the Holy Spirit to fill that now empty place with more of Him; and with more of Him came healing. The pressure to prove myself was gone and freedom abounded. With the healing came a whole new level of the person known as Colleen Pearl; I guess I didn’t realize the truth of what I had been hiding all these years; but God knew. 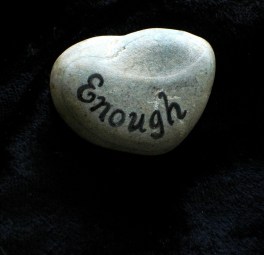 The truth is I was never enough to be anyone else.

The truth is God makes me enough because He is more than enough. 2Peter 1:3

The truth is I am only enough if I am filled with the Holy Spirit, relying on Jesus, and surrendered to God the Father. Colossians 2:10

The truth is Colleen Pearl is enough.

And enough is enough!

2 thoughts on “Enough is Enough: My Story Part 2”